VAL Avionics began in June 1979 as an avionics repair station at McNary Field in Salem, Ore. In 1986, the same year that current owner Jim Harr began working at VAL Avionics, the company began manufacturing its own NAV and COM units. The transition from local service shop to avionics producer wasn’t undertaken lightly — VAL Avionics founders Robie Furlong and Don Sloan saw prices climbing for general aviation technology and believed it was possible to create more affordable solutions by following a model of simplicity, durability and innovation. This meant VAL Avionics radios were designed to eliminate unnecessary components and space, assembled with the highest quality materials and built to be easily understood and implemented by users.

In the early '80's one of VAL Avionics founders, Don Sloan, began work on a new and innovative design for a new breed of aircraft radio. In 1986 the company introduced a small yet powerful transceiver, the COM 760 TSO. A significant void in the avionics marketplace was filled with this simply designed, high-powered radio boasting an 8-watt transmitter and 760 channels. Soon to follow was the BS7600 Base Station, which transformed the sleek panel-mounted COM 760 into an attractive yet durable base unit providing ground-to-air communication for thousands of FBO's, repair stations, municipal airport lobbies and government agencies.

The next product to be added to VAL Avionics' expanding product line was the solid-state CLA 500 cockpit lighting assembly. Again, based on simple design concepts, the CLA 500 provided a flexible solution to the ever more complex lighting demands of the homebuilt market.

VAL Avionics' design team soon turned its attention to navigation and ILS receivers. First to come in 1992 was the ILS 400, a complete instrument landing system receiver including a three-light marker beacon receiver all contained in a standard 3-1/8" instrument hole. Consumed with the idea of providing the most accurate information to the pilot,VAL Avionics steered away from the conventional needle movements and developed a highly accurate, easy-to-read digital display driven by an innovative and precise circuit design. Following the ILS 400 was the INS 422 Integrated Navigation System, which added a VOR function to the already powerful navigational aid.

In March of 2008, the venerable COM 760 was retired as a result of increasing numbers of unavailable parts, though existing COM 760s are still repairable for most failures. After more than 20 years of reliable service, VAL Avionics' original, hardworking radio was succeeded by a new generation. With the retirement of the COM 760, VAL Avionics released the COM 2000, a unit that addressed the shortcomings of the COM 760. In the spirit of Don Sloan, the COM 2000 was developed to fill a niche that had been forgotten by many others. The COM 2000 brought together a full 8-watt transmitter and many features the COM 760 lacked while fitting into a one-inch high panel opening. This new Ultra-Slim COM became the herald of the new 2000 series of VAL Avionics equipment. The INS 422, facing the same parts shortages, was also retired. Its successor, the INS 429, maintained a simple three-wire installation while adding many more features, including the ability for the unit to act as a head for other navigation and GPS equipment. This development offered pilots the opportunity to conserve panel space in small experimental aircraft where space is at a premium.

Today, VAL Avionics continues this tradition of affordable excellence through simplicity, durability and innovation. As the expense of aviation continues to increase at a rapid pace, VAL Avionics remains committed to offering low-cost, high-quality solutions for aviation enthusiasts in general aviation, light-sport and experimental aircraft. We believe aviation should be accessible to those who are passionate about it and that our units should be easy to use, effective and long lasting. You’ll see these principles in action in every one of our products. 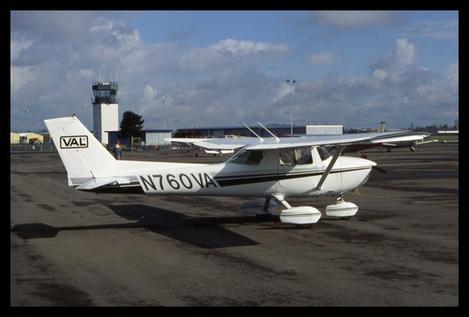 Our Cessna 150L used for product testing and development.
Prices (shown in USD), features, and specifications are subject to change without notice. Images are for reference only and actual product appearance and/or inclusions may vary. Not responsible for typographical or misprint errors. Copyright ©  2014 - 2015 by VAL Avionics Ltd., Salem, OR, USA All rights reserved. Reproduction in part or in whole prohibited.